reach out to Perlman & Wing 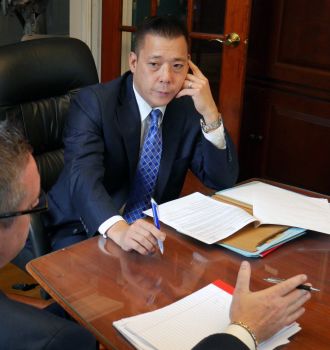 Attorney JP Wing has practiced law in the South Shore/Boston, Massachusetts area for over 10 years. Prior to opening his practice, he was an Assistant District Attorney where he prosecuted major felony offenses in both adult and juvenile court.

Currently, Attorney Wing specializes in criminal defense where he has represented clients in such matters as major drug offenses, assault and battery (domestic and non-domestic), homicide, and operating under the influence. Attorney Wing has experience representing both adults and juveniles in all Massachusetts courts.

He also handles various family law matters ranging from divorce to adoption as well as all modification matters involving changes in child support and child custody. Attorney Wing is an experienced professional litigator who has made appearances in Superior Court, District Courts, Probate Courts, Juvenile Courts, Housing Courts, and Land Courts all over Massachusetts.

"My goal is to help you understand the legal process as we fight for justice together."

Attorney Wing is an avid tennis player and sports fan. He has foolishly started playing the game of golf and continually subjects himself to its torture. He is an active den leader with the Boy Scouts of America and has also attained the level of Eagle Scout.

Attorney Wing will vigorously represent you and defend you against all government actions.